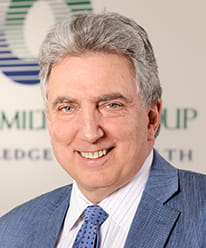 In 1971 Tom entered the financial and estate planning business with Howard Holladay, a general agent for National Life of Vermont and Equity Services, Inc. Since 1976 Tom has been a general agent, first with Chubb Life and then with Lincoln Financial. From 1981 until February 2017 he has conducted his investment business as a branch manager through Lincoln Financial Securities Corporation, member SIPC, or its predecessor corporations. In 1973 Tom earned his Charter Life Underwriters designation, and later became a CERTIFIED FINANCIAL PLANNER™ certificant. Since February 2017, Tom is an Investment Advisor Representative of Raymond James Financial Services Advisors, Inc.

Over the years Tom has served his community in a number of ways. From 1976-1987 he was one of the founding partners of the Cabot Street Cinema Theatre and Le Grand David and His Own Spectacular Magic Company. In 1986 Tom joined the Waring School Board of Trustees, serving as chairman from 1987 to 1993, during which he guided the transition from founding headmasters to the first non-family head who served for 25 years. From 1989-1995 he served as a Wenham Selectman. From 2004-2006 he was on the Board of the Essex County Community Foundation, serving as chair of their Planned Giving Committee. Since 2004 Tom has been on the Board of the Rockport Chamber Music Festival, now Rockport Music. Between 2005 and 2011 he chaired that Board as the organization undertook a $20 million capital campaign to build their own performance center, which opened in June 2010. He is currently serving as a trustee emeritus.

In December 2011 he joined the Board of Longy School of Music. In April 2012 Longy merged with Bard College. With Bard and the Los Angeles Philharmonic, Longy is fostering social change through music in their Take A Stand program. Between 2013 and 2018 Tom served as Chair of the Longy Board of Governors and as a Trustee of Bard College.

In September 2016 Tom joined the Board of Advisors of the Boston Symphony Orchestra.

Over the years, Tom has been honored for his non-profit service. In 2014 Tom was recognized by The Arts & Business Council of Greater Boston, Inc. for his work in service to the Boston community over nearly four decades. Their Champion for the Arts Award is given to distinguished individuals who have contributed extended time and resources to foster the business success of artists and cultural organizations in the Greater Boston Area.

In May 2017, the Essex County Community Foundation honored Tom at their Celebration of Giving event with their Professional Advisor Award that recognized Tom’s philanthropic leadership in Essex County and his tireless work in building a thriving arts and culture community in Cape Ann and beyond.

In January 1999 Tom married Andree Robert and they reside in Gloucester. He takes great delight in the unfolding of the lives of his three adult children, Rachael, Alex and Natasha and that of his son-in-law, Hitesh Hathi and grandson Mohan, and son-in-law Michael Berstein and grandson Ziv.

Raymond James is not affiliated with any of the listed organizations.

in the U.S., which it awards to individuals who successfully complete CFP Board's initial and ongoing certification requirements.